Four years after the events of BRONZE ANNIVERSARY, Mr. Walker (Charles Dera) is continuing his annual tradition of bringing home an attractive young lover for his wife Mrs. Walker (Natasha Nice), as her anniversary gift. However, this time Mr. Walker has a twist planned …

SCENE OPENS to Mr. Walker impatiently waiting for his wife to return home. When Mrs. Walker arrives, he tells her she’s late, but she doesn’t seem very apologetic about it. They stiffly wish each other a happy 12th anniversary, and then Mrs. Walker demands to know where her gift is. Mr. Walker tells her that she’s in the other room. Mrs. Walker is confused and suspicious as she repeats, ‘SHE?’

Mrs. Walker enters the bedroom and is outraged to see a young woman, Candy (Kenzie Reeves) waiting on the bed. Mrs. Walker tells her husband that THIS isn’t the arrangement they agreed upon … it’s supposed to be a GUY each year for her. Candy cheekily speaks up, saying that Mr. Walker told her all about their anniversary arrangement, and that it was getting … stale. So Candy is here to mix things up. Mrs. Walker angrily points out that she’s straight, but Mr. Walker accuses her of being close-minded and says that HE’S going to start things with Candy.

As Mr. Walker and Candy start to touch each other, Mrs. Walker becomes uncomfortable and a bit less combative, as if realizing that their anniversary arrangement – and even their marriage – is potentially in trouble since she doesn’t have any leverage to keep her husband faithful if he doesn’t want to be. She begrudgingly agrees to accept the gift in order to appease Mr. Walker, and has sex with Candy while Mr. Walker hungrily observes.

Mrs. Walker is inexperienced at lesbian sex and unsure of what to do, needing some guidance. Mr. Walker is happy to join in and help, which was part of his plan all along … 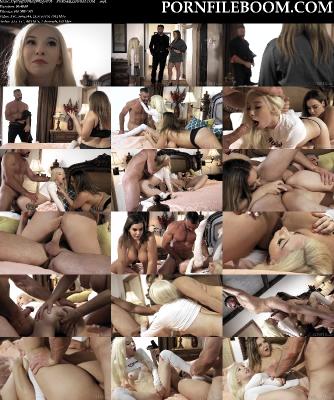